Confucianism is generally thought of as a religion but many who support Confucius say that its a belief or a way of life.

Confucianism encourages cultivation of knowledge and expects an upholding of ethics deemed suitable to the persons place in society. Children were expected to be respectful to their elders, when the children grew up they were expected to care for the parents until the afterlife and pray for them once they had died.

Women throughout Ancient Chinese history are known to be the dominated group, Confucius agreed with these ideas. He believed that women belonged to the inner realm of life. The inner realm was housework, cooking, babies, foot binding and pleasing their husbands. Confucianism expected women to be subordinate to three men throughout their lives- their father, their husband once they married, and if the husband died before the woman did her first son was her dominant.  However some women were able to become very powerful in their own right, with changing how the social part  of society worked. This also caused certain political changes due to concubines going in and out of favor of the emperor causing the families of the concubines who were favored to be given a higher social standing. 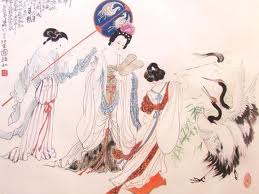