Confucius believed that every person had there place in society. He enforced through his philosophy, and turned Ancient China into a structured society. This structured society was based on work/effort given by the social class. For example- The merchants were at the bottom of this system even though many were wealthy, they didn't labor like farmers did.

Confucius made another impact on society by creating a school. The school educated young boys in the way of Confucianism and also taught them Calligraphy so many of the boys went on to becoming scholars.

The beliefs of Confucianism made woman subordinate throughout the religion. This re-affirmed the claim that woman were not as powerful or wise as men. This impacted how woman were viewed as in society causing many woman to try and claim social status with gruesome practices such as Foot-Binding.

Confucianism did create a society which had a stable structure and was very stable for the majority of the time it was used as an example of a perfect society.  Even though it had many positives including a boom in economy it also had many drawbacks. 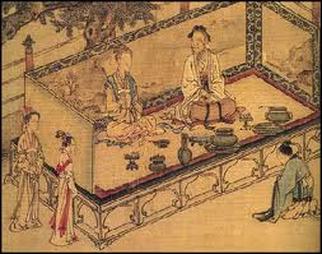 A painting displaying relationships in a Confucian society
Powered by