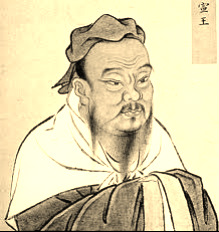 Confucius in the later part of his life
His life:
Confucius was believed to be born in 500 B.C.E  He was the son of a lower class scholar, whom had 9 daughters before Confucius. Confucius was brought up in the traditional way- he learnt to hunt and fight and also learnt calligraphy. He became a minor official to the family who ruled Lu state in which Confucius had been born in. Confucius returned to the power of the state to the duke causing an up-heavel in his career. The duke rewarded him with a high ranking job. He went into exile with the duke when he the Duke lost his power and stayed in exile for 9 year. When he came back he was ready to make a difference with large ideas on teaching, politics and society. However he realised he wasn't being heard and the emperor wanted nothing to do with those ideas, so at age 56 he went into exile for 12 years with a small group of his students. When he returned he set up his school of learning and retired and wrote many books on Confucianism. He died in 479 B.C.E.

"At 15 I set my heart on learning; at 30 I firmly took my stand; at 40 I had no delusions; at 50 I knew the Mandate of Heaven; at 60 my ear was attuned; at 70 I followed my heart's desire without overstepping the boundaries of right."
Powered by